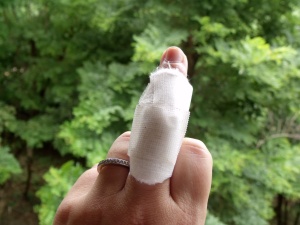 I sliced my finger on the lid of a spaghetti sauce can last night which sent me into a tailspin of panic.  Though painful and bloody, the cut was seemingly benign.  Nothing that a few stitches and a tetanus shot couldn’t take care of.   Yet my reaction was Oscar-worthy, rivaled only by the time I was dumped by my college sweetheart and slipped into a 2-month depression.

Since our move to Nicaragua, I’ve fallen down concrete hills, stepped on stingrays, and boarded down a volcano and survived, all of which resulted in memorable scars of our journey in Nicaragua.  So why was this latest notch on my bedpost of injuries invoking such anxiety?   The answer – I’m 5 months pregnant.

Justin struggled to understand my hysteria.  As he fumbled thru the house in search of Band-aids and Bactine, I sobbed into the blood soaked towel wrapped around my finger and fretted about the possibility of a trip to the local Centro de Salud.  Having only been there once before for an anti-parasite prescription, I conjured up visions of rusty needles and disgruntled nurses.

My already pregnancy-laden hormonal thoughts had spiraled out of control into a place of utter fear that had very little to do with my finger and much more to do with this looming birth.  What if I went into labor early and couldn’t make it to Managua in time?  What if I had to give birth at the Centro de Salud.  What if I went to the Centro de Salud for this cut and they prescribed me something that could ultimately harm this developing baby inside me.  If Justin couldn’t find the Band-aids, how was he going to find the hospital in Managua, two and a half hours away?  What if, what if, what if?

As a self-proclaimed control freak/hypochondriac, pregnancy is bound to cause some level of anxiety in an expecting mom.  DSM-IV diagnoses aside, Pregnancy can cause moments of anxiety in any mom.  Mix it all together with a birth planned in Nicaragua, with Spanish speaking doctors, thousands of miles from family and you have the perfect recipe for an all out freak out, which is exactly what I did last night.  The finger will heal, with or without stitches, but what will happen to me and more importantly, to this baby that I have already been waiting 5 months to meet? 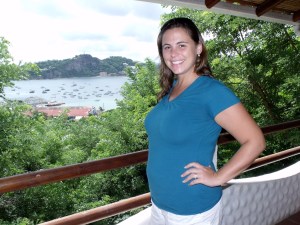 Our original plan was to live in Nicaragua for a year, evaluate our experience, and then perhaps move back to the States, get desk jobs, set up home in an insanely expensive Boston suburb that we couldn’t afford and procreate.  Well, that was my plan.  But, as one year crept into two, both Justin and I began to discuss the possibility of having children abroad.  I wasn’t getting any younger and the economy in the States wasn’t getting any better.   After reviewing numerous birth scenarios (go home now, get jobs, get insurance, get pregnant; get pregnant here, get on a plane back to States for delivery; get over it and just do it), we decided to ignore the one piece of advice that my physician father tried to impart on us during regular visits, “just don’t get pregnant down there.”  Four months later, I was pregnant and we were overjoyed.

By that time, we had met with one of the top OB-GYNs in the country at Vivian Pellas Metropolitano Hospital, discussed a prenatal plan, and witnessed some of our best friends, here in Nicaragua, get pregnant and give birth to happy, healthy babies.  Just as in the States, my OB here recommended the regular battery of pre-natal tests, exams, and vitamins. Moments after we watched the tell-tale pink line develop, we were on the phone to my OB discussing necessary appointments and ultrasounds.  Since that day, we have received top-notch care that rivals the assistance that my sister has received at state of the art Boston-area hospitals.

So, you know the old adage that “women have been giving birth to babies, alone in the middle of fields since the beginning of time”?  Well, it’s more or less true.  And more importantly, women have also been having babies in Nicaragua this whole time.   Giving birth is an incredibly natural life event.  You can prep all you want with doctors and specialists, but ultimately, this little creature is going to enter the world on her own terms at her own pace.  And that, she can do anywhere.

Later that evening, after my finger was carefully washed and bandaged, Justin quietly offered to pack my “hospital bag” so that we are ready to hit the road when labor begins.  With more than 4 months to go until the arrival of Baby Fahey, I’m thinking that maybe Justin really will be able to find the hospital after all.

32 thoughts on “A Slice of Reality: Getting Pregnant and Giving Birth in a Foreign Country”