His most defining characteristic – Cooper was Stubborn until the very end. Noticing his rapid decline in health, Justin and I made an appointment to take him to the vet in Managua, the following morning, acutely aware that a very difficult decision might be upon us. But, true to character, Cooper, made the decision for us, passing quietly into the night on March 26, 2010. He was 12 years and 1 month. He was surrounded by friends, under a moon-lit sky as his spirit left us. We buried him on the hill above our house, wrapped in his favorite blanket and hugging his favorite stuffed black dog.

During the course of his lifetime, Cooper lived in 12 different houses, 2 countries, swam in two oceans, and flew on an airplane. He walked on snow and sand. He saw me thru breakups, depression, and illness. He was with me when I graduated from college, worked in my first job, met my husband, got married. He welcomed two nieces and a nephew to the clan. He had over 20 different dog sitters, from family to friends to neighbors. He had best dog friends like Bear and Gus and Nunez and Shaka and Birbo and best people friends like Justin and Mom and Dad and Paul and Diana and Tina and Jennie and Smem and Suyen and Gladis and Kim and Theresa and on… He is the most wonderful dog and I will miss him dearly. Rest in peace, my sweet, sweet pup, Cooper. 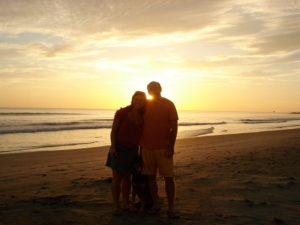 9 thoughts on “Saying goodbye to my pup”