December is a month of great celebration across Nicaragua.  This past weekend, Justin and I traveled to León, the second largest city in Nicaragua, because of its reputation for the best fiestas.

A Giganton, measuring almost 9 feet tall, dances in the streets of León

Monday, December 8th, marked La Purísima, a celebration of the ‘purest conception of Virgin Mary.’  At 6 pm on December 7th, everyone from town gathers in the central park, on the steps of the church.  The priest or bishop of the local church signals the beginning of Purísima by asking the crowd “Quién causa tanta alegría? (Who causes so much happiness)?”  The town responds by saying “La Concepción de María’ (Mary’s Conception).”   After this, people across the town launch hundreds of fireworks and fire crackers.  Firecrackers explode again at midnight and then at 6 am and noon on the following day.  Shortly after the proclamation, La Gritería begins. 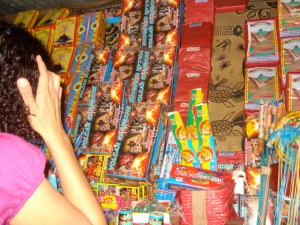 A selection of fireworks

La Gritería, draws much comparison to Halloween, but with greater emphasis on religion.  Similar to trick or treating, people take to the streets, stopping at one home after another seeking candy treats and other small gifts.  People place elaborate altars in their front entryway, displaying the Virgin Mary, the Nicarguan flag, flowers, and more.  As people approach the door, they again say “Quién causa tanta alegría?” and the people in the homes respond with “La Concepción de María.”